Join us every Sunday at 9:30 AM (Utah time) to watch Music and the Spoken Word, a weekly presentation by the Mormon Tabernacle Choir.
I’m confused. I’ve already been baptized once. I have to do it again? It’s just joining a church. I’m confused.

2 Responses to “I’m confused. I’ve already been baptized once. I have to…”

Gabriel Duarte
2017-06-04 03:18:11
Hi Jen. Thanks for your question. I understand your confusion, but Mormons don't quite see it that way. When people decide to join the LDS Church, they're not just joining another church. They're joining the restored church of Jesus Christ. Let me explain briefly what that means.

When Christ was on the earth, He established not only a church, but also the authority to act in His name. He gave this authority to His apostles. With the death of the apostles and the theological confusion caused by various geopolitical factors (great distances between congregations, the martyrdoms of various apostles, Roman influences, etc. ), the apostolic authority was eventually lost.

Many good people kept the Christian message alive. These good people founded various churches that have done a lot of good over the years. The world is a better place because of them. But their churches are not authorized to realize certain key ordinances in Christ's name. They simply lack the apostolic authority.

Baptism is one of the ordinances that requires that authority. The baptisms performed in other churches of course have value. They symbolize one's commitment to Christ. But because they were performed by one who lacked the apostolic authority, a second baptism by one who has that authority is crucial.

The story of Joseph Smith
Thankfully, Christ's ancient church has been restored in our days, together with that critical authority. When people choose to join The Church of Jesus Christ of Latter-day Saints, they are baptized by that restored authority.

I hope this answer helps! If you're not already doing so, I suggest you chat with the Mormon missionaries. There are over 70,000 missionaries in the world who visit people in their homes to teach them more about Jesus Christ. Most people who are interested in Mormonism learn about our basic beliefs from these missionaries. You can request a missionary visit online. All the best! 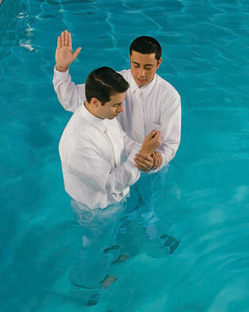 Baptism into The Church of Jesus Christ of Latter-day Saints requires full immersion in water by a person who holds the priesthood authority to baptize.
I can understand how you might be confused. My first question for you, though, is when were you baptized? I, personally was raised. I was Catholic until I was 12. As such, you might guess that I was baptised before I could hold my own head up. I believed the feeling is that because of "original sin" I would end up in hell or purgatory if I died as a baby. So baptizing me early, was absolutely necessary. But I ask you this: what sin has a newborn committed that would warrant s/he go go to hell?

One requirement made of us that I observed even as a young child, while reading the Bible is this: repent and be baptised. So the order is to first repent. Repentance isn't a simple "I'm sorry". Repentance is a genuine desire to change. Once that decision has been made, and a person is ready to commit to that change, THEN is baptism a valid next step. Ultimately, baptism is a new beginning.

Someone described it as this. You have a nice clean board. Each time you commit a sin, a nail is driven into that board. When you repent, the nails are taken out. But the holes are still there. Baptism is like getting a brand new board. It's a clean slate.

If you're wanting to become a member of the church, I'm sure you're ready to make a clean start spiritually. I invite you to chat with your local missionaries as they can answer any other questions you may have. I also suggest checking out http://www.lds.org or http://www.mormon.org as many of your questions can be answered the as well.