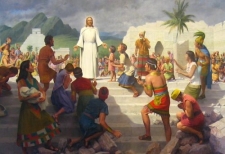 The BOM describes how Christ visited an ancient American people after His life and ministry in Israel.

Mormons accept the Bible (Old and New Testaments) as the word of God, as far as it is translated correctly. Additionally, we believe the Book of Mormon (BOM), another testament of Jesus Christ, to be the word of God. While we consider the teachings of both these books to be sacred, we recognize that neither is infallible.

As of 2004, The BOM had been published in over 100 languages. Since its first publication in 1830, over 120 million copies have been produced. Over 4 million were distributed in 2004 alone.

An online copy can be found at www.lds.org.

9 Responses to “Book of Mormon”