Enduring to the End by Keeping the Commandments

As mentioned above, faith, repentance, baptism, and the gift of the Holy Ghost (i.e. “The First Principles and Ordinances of the Gospel”) are not enough to guarantee salvation; rather, after these initial steps a continuous, life-long commitment is required for continued personal progress. This life-long commitment, which we call “enduring to the end,” includes both inward and outward changes. Inwardly, we must seek to change our hearts, to align our wills with the will of God. This comes as we develop faith in Jesus Christ. Outwardly, we must show forth good works by choosing to keep the commandments God has revealed through ancient and modern prophets and apostles. Rather than trying to find a religion that “best fits” our lifestyle or “picking and choosing” which religious directives we’ll accept (i.e. religion a la cart), we should instead actively seek to discover God’s will and to do it. God blesses those who endure to the end by striving both to develop faith in Christ and to keep His commandments.

(Scriptures: Salvation by Faith and Works)
Our emphasis on keeping the commandments should not be misinterpreted. Specifically,

With this background, let’s explore a few of the commandments God has revealed through His ancient and modern prophets and apostles.

The Word of Wisdom

Trying to fit in…
In the early 19th century, many of us used chewing tobacco, including the prophet Joseph Smith. Emma Smith, Joseph’s wife, noticed that discussions about Christ and His gospel were often interrupted when members of the Church paused to spit tobacco onto the floor. She questioned the practice–especially because she was the one that cleaned up after the spitters–and so suggested that Joseph ask God for further instruction. What followed was a revelation, which we called the “Word of Wisdom.” ()

In addition, the Word of Wisdom encourages members of the Church to eat herbs, fruits, and grains.

God promises both physical and spiritual blessings to those who follow this Word of Wisdom. Although unknown to the early members of the Church, science has since proven the physical benefits of many word-of-wisdom recommendations. Indeed, epidemiological studies suggest that American members of the church live, on average, several years longer than their compatriots. The Word of Wisdom also brings spiritual blessings; with the mind free from addictions, the influence of the Spirit of God is more easily felt.

Fasting, a practice that dates to Old-Testament times, is to voluntarily abstain from eating and drinking with the purpose of drawing closer to God. While members of the Church are free to fast whenever spiritual strength is needed, the first Sunday of each month is specifically designated as “fast Sunday.” On this day,

Christ Himself taught the sacredness of personal sacrifice when He was on the earth.
In the early 19th century, we adopted a communal economic system called “the United Order.” Members of the Church gave everything they earned to the Church, and the Church redistributed those earnings according to individual members’ needs. Some early members, however, lacking the required dedication, resisted this system. God, recognizing that the Church was not prepared for this higher law, instructed us to switch over to capitalism. In place of the United Order, God established the twin commandments of tithing, designed to care for the financial needs of the Church, and fast offerings (described above), designed to care for the financial needs of the poor. ()

Tithing, defined as 10% of one’s earnings, is a financial offering given to God by way of the Church. Like many of God’s commandments, the practice also has Old-Testament origins. Tithing funds are used to build chapels and temples, finance the Church’s missionary program, and in general to build up and strengthen what we consider to be God’s kingdom on earth.

(Scriptures: Tithing)
One distinguishing characteristic of the LDS Church is that tithing funds are not used to pay “the pastor’s salary.” With very few exceptions, members of the LDS clergy are unpaid. Our clergy is comprised of Church members that volunteer their time free-of-charge after hours in hopes of strengthening the Church they love. Rather than paying the salaries of individual clergymen, tithing funds are used for purposes that benefit the community at large, reminiscent of the original “United-Order” philosophy of the 19th century.

God has commanded His children to meet together frequently; our congregations meet once a week, on Sunday. Frequent Church attendance brings blessings that are not possible when members of the Church worship only at home. () 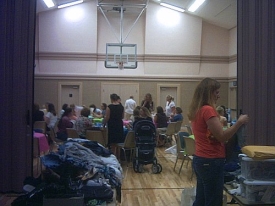 A group of LDS women gather for a service project.

Some mistakenly see the Church as a religious social club. When key friendships wane or social irritants arise, they stop attending Church. Rather than attending Church for social reasons, we should attend Church because of our desire to worship God and to strengthen ourselves spiritually. Regardless of how irritating so-and-so is–what sizable congregation of any denomination doesn’t have some irritating members?–God has commanded us to be active members of the Church, and our love for Him should compel us to obey that commandment. In the end, God will judge us based on our individual, personal dedication. I doubt He will accept excuses in which we try to place the blame for our inactivity on another’s irritating habits or another’s waning friendship. That having been said, we are known as a very friendly people. While any social benefits of Church attendance should be secondary to the desire to worship God, the wonderful friendships often formed among members are both rewarding and faith-promoting.

We Oppose Fornication and Adultery

A group of church members sing a comedy song about the importance of waiting until marriage. Pardon the inside jokes… but I think you get the point. 🙂
We believe that intimate relations prior to marriage, including sexual intercourse (fornication), petting, masturbation, and pornography, run contrary to God’s will. Likewise, having intimate relations with someone other than one’s spouse after marriage (adultery) is also considered a grievous sin. By using our free agency–our ability to choose between right and wrong–to choose to give ourselves only to that person with whom we are prepared to make a full, marital commitment, we show our love for God and for our (future) spouse. I like to think that this “commitment to commitment” makes us a particularly romantic people! ()

(Scriptures: Fornication and Adultery)
In order to guard against immorality, the LDS Church counsels its members to wait until they are 16 years old before dating, an age at which most (hopefully) have the maturity to make wise decisions. Group dates are typically preferred during the early dating years. As young adults, we begin to think in terms of marriage, and couple dates become more common. As pairing off occurs, temptation naturally increases; young couples often receive council from Church leaders in order to strengthen their resolve to wait until after marriage before sharing themselves fully with one another.

As with nearly all sins, we believe that one can repent of fornication or adultery by taking advantage of Christ’s atoning sacrifice. Members of the Church who have fornicated or committed adultery but have walked the oft-times arduous journey of repentance can once again enjoy all the benefits of Church membership. This principle of repentance is particularly important for those who wish to become members, many of whom did not appreciate the importance of chastity before they encountered the Church and its teachings. Such converts can and do enjoy the full blessings of Church membership.