Jesus Christ is the Central Figure in God’s Plan

What Mormons believe about Jesus Christ
Like loving fathers here on earth, Mormons believe that our Heavenly Father is intensely interested in our well-being and development. He has created a plan for His children with the goal of helping us progress. Like all Christians, Mormons consider Jesus Christ, God’s chosen Son, to be central to that plan.
()

An introduction to God’s plan for each of us
Before coming to earth, during what Mormons call the “pre-mortal existence,” we lived as spirits in the presence of God the Father and His Son Jesus Christ. Our feelings for our Father, a spiritually perfect being with an immortal physical body, certainly included great admiration and respect, just as a child here on earth often admires and respects his parents. Mormons imagine that God must have looked upon all His children with a divine hope similar to that of earthly parents, the hope that children will grow and progress, the hope that they’ll learn to be the best they can be.

The Pre-Mortal Existence: Spiritually Different than God and Jesus

In the pre-mortal existence, however, our progress was limited. While we were capable of sin, living in the very presence of God the Father and His Son Jesus Christ certainly made it easier to choose to follow them. Mormons believe that living in their presence, under their immediate tutelage, our opportunities to independently demonstrate our commitment to doing their will were limited, and, consequently, so, too, was our spiritual progress. We were like teenagers living with our parents, not yet beneficiaries of the increased growth and maturity that come when children leave home and are forced to make choices on their own. () 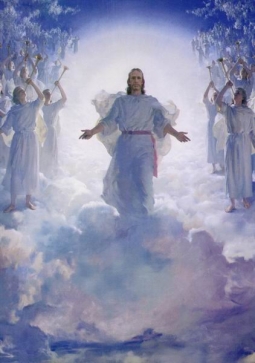 Jesus Christ offered to come to earth as our Savior. He paid the price for our sins, thus bridging the ever-widening gap between us and our Father.

God the Father and Jesus doubtlessly wanted to somehow “send us off to college,” to somehow remove us from their immediate presence and thereby give us the opportunity to grow on our own. Mormons recognize that independence, however, often breeds foolishness, especially in creatures as spiritually immature as we. While independence would encourage development, we would inevitably make poor choices, sins that would inhibit that development and distance us from both God and Jesus Christ.

In order to overcome this dilemma, Mormons believe that Jesus offered to come to earth as the Savior of all mankind. He would pay the price for our sins, making forgiveness possible on condition of repentance. Jesus would bridge the ever-widening gap between us and our Father, allowing us to progress despite our imperfections. Because of His essential role, Jesus Christ is central to God’s plan and central to Mormon theology. Just as He demonstrated His perfect unity with the Father in this instance, so it is always. One with the Father, the Father has placed Jesus on His right hand; as a member of the Godhead, Jesus is worthy of our Christian adoration.

Spiritual immaturity — sin — was not the only obstacle to our personal progress. Unlike our Father, who possessed a perfect, immortal body, as spirits we did not have physical bodies. Mormons believe that God the Father and His Son Jesus wanted us to progress physically as well as spiritually but recognized that, as spiritually immature beings, we were not prepared to receive perfect, immortal bodies. As part of their plan for our continued progress, they instead chose to provide us with imperfect, mortal bodies. With these mortal bodies we could learn to control associated passions; only then would we be given immortal bodies like our Father’s.

(Scriptures: God has a Physical Body)

Recognizing the need for spiritual independence in order to foster growth, thankful that Jesus Christ would compensate for the mistakes that that independence would inevitably foster, and conscious of the need to provide His children with physical bodies, Mormons believe that the Father decided to send us to earth in order to encourage our continued progress. Here on earth, we can progress both physically and spiritually.