As mentioned above, when Joseph Smith asked God which church he should join he was told that no church then existent possessed the divine authority to act in God’s name. No church then existent had the fullness of Christ’s gospel. When Christ walked the earth, however, He did establish His church. What happened to that original church? If the church then possessed the authority to act in God’s name, how was that authority lost? How were the original teachings of that primitive Church altered? Mormons believe that the early Christian church fell away from Christ’s original organization (the apostasy) and that that church was restored through Joseph Smith in the 19th century (the restoration). ()

Christ personally established His original church in ancient Israel. Anticipating His death, He knew that inspired leaders had to be called to communicate directly with God in order to prevent menóhowever well-intentionedófrom introducing their own philosophies into His gospel. Christ called prophets and apostles to serve as God’s spokesmen and gave them the authority to act in God’s name, what Mormons call “priesthood.” 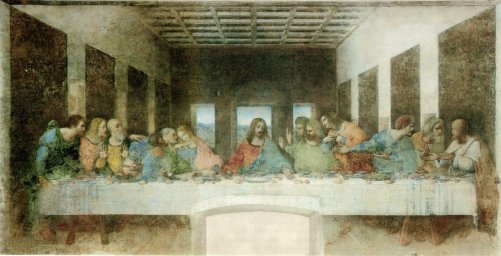 The apostles Christ called to serve as his spokesmen are depicted here in da Vinci's famous painting entitled "The Last Supper."

After Christ’s death, prophets and apostles continued to communicate with God and to lead the Church according to divine instructions. They worked hard to preserve the teachings of the original church, sending epistles to distant Christian congregations and visiting them when possible, all in an effort to prevent the introduction of men’s philosophies into Christ’s original doctrine. These early Church leaders, however, faced significant challenges. First, the various Christian congregations were spread far apart, and travel was limited by 1st-century technology. It was difficult for the early Church leaders to visit the various congregations frequently enough to prevent false ideas from taking hold. Second, the prophets and apostles were themselves actively persecuted, further complicating an already challenging situation.

These early Church leaders well recognized–both by simple observation and by divine revelation–that preserving the original Christian church would be impossible. As the apostle Paul taught, “For the time will come when they will not endure sound doctrine; but after their own lusts shall they heap to themselves teachers, having itching ears; And they shall turn away their ears from the truth, and shall be turned unto fables” (2 Timothy 4:3-4).

The persecution of the prophets and apostles eventually lead to their deaths as martyrs. With their departure, the authority to act in God’s name was no longer found on the earth, and direct prophetic/apostolic communication with God came to an end. Thus began what Mormons call “the great apostasy,” or the great falling away.

(Scriptures: The Great Apostasy)
Without revelation from God, men–mostly well-intentioned–were left to try to preserve Christ’s original teachings on their own. Mormons respect these “early church fathers” as righteous individuals who strove to keep the Christian tradition alive in the face of tremendous challenges. In the absence of direct communication with God the encroachment of human philosophies and politics on Christianity was inevitable, but these men nevertheless did a noble job in preserving many of the truths that Christ’s had introduced during His mortal ministry.

Mormons likewise respect the great Christian reformers, men who tried to correct some of the erroneous human philosophies that had crept into the Christian religion. Many of these early protestant Christians recognized, however, that, like their predecessors, they also lacked the authority to act in God’s name; rather, they were simply doing the best they could in the absence of direct revelation from God.

Roger Williams was one of these. After fleeing the Massachusetts Bay Colony, Williams founded Rhode Island. He called his headquarters “Providence,” indicative of his life-long search for the original New-Testament church. Said Cotton Mather, “Mr. Williams finally told his followers that being himself misled he had misled them…he was satisfied there was none upon earth that could administer baptism or any of the ordinances of the gospel, so he advised them therefore to forego all and wait for the coming of new apostles.”

Joseph Smith and the Restoration
It was against this historical background that in the early 19th century God chose to restore His original Church. First, God once again chose a prophet, Joseph Smith. Later, the authority to act in God’s nameóthe “priesthood”ówas likewise restored. Finally, twelve apostles were called, individuals who, like the prophet, received revelation from God for the benefit of the Church. Through this prophetic/apostolic revelatory process, God has clarified ancient, difficult-to-interpret biblical teachings. He has revealed additional principles that either were not had among the early Christians or were not included in our modern-day Bible. He has taught how to correctly apply ancient, biblical principles to our modern-day lives.

If you’re interested in visiting an LDS chapel to get a better feel for what the restored Church of Christ is really like, the Church has provided an on-line Meeting House Locator. Before visiting one of our chapels, you might want to visit this page, which includes a description of LDS worship services and a virtual tour of an LDS chapel. ()

One Response to “Mormon Apostasy and Restoration”