The Church of Jesus Christ of Latter-day Saints has over 5,000 service missionaries (another site said 3,000) that work without pay to aid the poor.
(Accurate as of ~2003.) 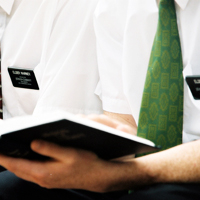 61,000 proselytizing missionaries in over 300 missions in 165 countries work without pay.

If you’re interested in gaining a further glimpse into the mind of a missionary, I’ve also written other mission-related personal essays that might interest you. They are entitled Diadema, The Master and the Message, Little ones, and I’m a Hero and I Know it.
(Accurate as of ~2003.)