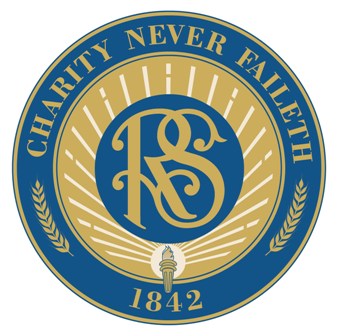 The seal of the LDS Relief Society, the largest women's organization in the world.

Women preach from Mormon pulpits and serve as organization presidents, teachers, committee chairs, etc, even at the global level of leadership. ()
(Accurate as of 2006.)

The Church also has an organization for young women (image).

In 1870, Utah became the second state in the United States to extend to women the right to vote. Wyoming beat us by two months.
(Accurate as of 2006.)

Sheri L. Dew, a Mormon leader and the CEO of the church’s Deseret Book Company, speaking about Mormon women. Addressing a Mormon audience, sister Dew uses a lot of “mormonese” (sorry friends of other faiths!). Just the same, her message is powerful.
Some highly visible Mormon women have included…

While Mormon polygamy is interesting from a historical standpoint, it is not relevant to modern Mormonism. Members of the Church have not practiced polygamy for over a century, and any Church member with multiple wives is excommunicated. ()

10 Responses to “Mormon Women and Polygamy”