Our Concept of God

Mormons are not Christian? 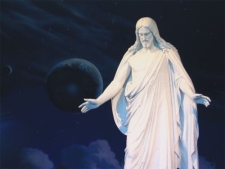 We are Christians, as our official name, The Church of Jesus Christ of Latter-day Saints, suggests. It is true that we do not consider ourselves “Protestant,” as we do not protest the Catholic Church; the two faiths have worked extensively together on humanitarian and other projects. It is also true that we do not consider ourselves “Born-Again Christians.” While we do believe that one must change his heart–must be born again–to come to God, the “Born-Again Christian” label entails far more than a belief in spiritual rebirth.

After His death and resurrection in Israel, we believe the glorified Christ visited peoples elsewhere, including in ancient America. An account of this visit can be found in the Book of Mormon.

Our faith in Christ is based on His life as described in the New Testament. We also believe that after His death and resurrection in Israel, the glorified Christ visited peoples elsewhere, including those of the ancient American continent. An account of this visit can be found in the Book of Mormon. Click here to listen to the Book of Mormon narrative, or click on the videos below, which dispel any myths regarding our dedication to Christ, depict a dramatization of Christ’s visit to the ancient American continent, and describe the our perspective on being “born again.” The following links provide additional images and information: Christ on the American continent, the price of sin, the second coming, a portrait of Jesus. ()

Some of my personal essays also illustrate Christ’s importance in our theology.
In The Master and the Message, I comment on how Christ is central to our missionary program.
Golgotha and the Garden Tomb describes how I imagined Christ’s life when I was a young man studying in BYU.

We seek after Jesus Christ
We do believe that men and women are saved through the grace of Christ, after all he can do. We believe that in addition to developing a faith in Christ’s grace, to obtain salvation one must also show his loyalty to God by obeying His commandments. Despite our best efforts to obey God’s commandments, and obedience is important, we are all sinners. To save a sinner–even a well-intentioned but humanly imperfect sinner that, despite his or her best efforts, fails from time to time–violates God’s law of justice. But to condemn the well-intentioned violates God’s law of mercy. This seeming paradox is resolved through the grace of Christ, who paid the price for our sins on condition of our sincere effort and repentance.

Mormons have an unchristian view of God? Mormons are polytheistic?

The concept of trinity (that God the Father, Jesus Christ, and the Holy Ghost are simultaneously three separate entities and one single “substance”) was formally adopted by the early Christian church in 325 AD with the Nicene Creed after much debate and with many dissenters. We believe that by this date the early church had lost the authority to act in the name of God, and so we do not feel obligated to accept the decisions of the creed. As luck would have it, though, the Nicean description of trinity is so vague that it easily includes our concept of God.

The concept of trinity describes one God in three persons, all three of whom, as distinct ‘persons’ or ‘hypostases,’ share a single divine essence, being, or nature. This idea is summed up in the Athanasian Creed, written some years after the Nicene Creed, which states: “We worship one God in Trinity, and Trinity in Unity, neither confounding the persons, nor dividing the substance. For there is one person of the Father, another of the Son, and another of the Holy Ghost. But the Godhead of the Father, Son, and Holy Ghost, is all one; the glory equal, the majesty coeternal.” How do we understand this confusing and apparently contradictorial concept?

Some criticize the LDS Church, claiming that it is not a Christian denomination. By believing that God the Father, Jesus Christ, and the Holy Ghost are physically separate although perfectly unified in purpose, our theology, it is claimed, is incompatible with the Nicene Creed. Why the Nicene Creed is a Christian requirement is not explained, nor are the reasons our theology violates the creed satisfactory.

Other critics go even further, claiming that we are polytheistic. This view is simply inaccurate. We believe in one God as taught in the scriptures; they believe that God the Father, Jesus Christ, and the Holy Ghost together constitute one single “Godhead.” In our church, the words “God” and “Godhead” are often used interchangeably. When we say that God is omnipotent, omniscient, omnibenevolent, eternal, immutable, and immortal, we do not distinguish between the Father, the Son, or the Holy Ghost but instead refer to them collectively as one single entity, the Godhead, or, often, simply God.

Do we worship Joseph Smith?
We consider Joseph Smith to be a prophet like Moses, a man through whom Jesus Christ restored His church as it existed anciently. We respect Joseph for the work he did, but we reserve our worship for Jesus Christ and God the Father alone. ()

In 1820, at the age of fourteen, Joseph was deeply perplexed about which church he should join. After reading a passage in the Bible that instructed any who lacked wisdom to “ask of God” (James 1:5), Joseph decided to turn directly to God for guidance.

Early one morning in the spring of 1820, Joseph went to secluded woods to ask God which church he should join. As he was praying, God the Father and the Son appeared to him. Through this divine visitation, which we call the “first vision,” God restored the ancient Christian church.

To listen to the story of the the restoration of the ancient church in Joseph Smith’s own words, click here.

Through the prophet Joseph Smith, Christ restored His ancient gospel in our days

27 Responses to “God and Jesus”