Celebrate the birth of the Savior Jesus Christ with us. We hope you enjoy the holiday songs we've posted on our website. Merry Christmas.
Join us every Sunday at 9:30 AM (Utah time) to watch Music and the Spoken Word, a weekly presentation by the Mormon Tabernacle Choir.
Please explain how the LDS church interrelates to all the various offshoots of the original LDS movement of Joseph Smith, especially the Community of Christ, and many others. How is it that so many different movements emerged all claiming to be the truth?

Also, please explain to me why these other movements did not have the exclusion of Black people like the LDS of Utah did until 1978? Did Joseph Smith teach it? Thank you. 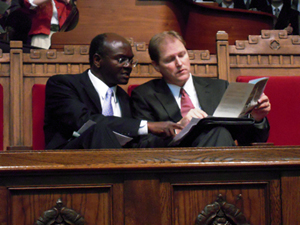 Elder Sitati, the first General Authority (Mormon Cardinal) from Sub-Saharan Africa, gives instructions to a Stake President in Los Angeles, California. Photo by Dale Wight.
Hi Dave. Much thanks for your follow-up question. Every major branch of Christianity (or any other religion for that matter) has had its divisions. Mormon Christianity is no different. If anything, Mormonism in remarkable in how little it has divided. The only other large religious body that claims to be the church restored by Joseph Smith in the 19th century is the Community of Christ, formerly known as the Reorganized Church of Jesus Christ of Latter-day Saints. It currently claims 250,000 members. In contrast, the Church of Jesus Christ of Latter-day Saints (based in Salt Lake City, Utah) claims over 16 million members.

Your second paragraph is problematic on many levels. First, it is not true that the LDS Church excluded Black people until 1978. There have been Black Mormons since early in our church's history. Some Black Mormons even came across the plains as pioneers and are among those we praise in church talks and books. It is true, though, that early Mormons unfortunately adopted some ideas from Protestant Christianity that took too long to correct. Most Black Mormons were consequently unable to participate in some of our sacred ordinances for some decades. Thankfully this practice has been entirely abandoned. It was abandoned before I was even born, in fact.

I've written extensively about this topic. Feel free to search the site. The church itself has written a historical essay that does a better job than I ever could: https://www.lds.org/topics/race-and-the-priesthood?lang=eng

Your claim that other branches of the Mormon tree did not adopt these unfortuante notions is also false. For example, some of the very small offshoots in Southern Utah--who oppose the larger LDS Church based out of Salt Lake City--have seemingly expanded upon rather than abandoned those concepts.

To answer your final question, I'm not aware of any teachings by Joseph Smith himself that support the racial ideas that came afterward. That is, thankfully, perhaps one of the many reasons the LDS Church has been able to so effectively abandon the associated faulty theology in recent decades.

I hope this answer helps.

Dave S.
2018-07-09 11:42:37
If the discrimination against Blacks (sons of Canaan etc.) in the priesthood was initiated by Brigham Young, or anyone else it must be documented. And if it was not really a divine decree then it did not require the church to believe it had to wait for a revelation to change it. This makes having waited until 1978 unnecessary, even according to Mormon theology.

Mario Rios: To be clear, Brigham Young was not the person who came up with the faulty "Curse of Cain" idea. This was a Protestant idea popular during his time. It's unfortunate that Brigham accepted the idea, but he was not its originator.

Not sure why you assume anything has to be documented, given that many historical events lack specific documentation.

But beyond that I agree in principle with what you wrote. I do not think it was theologically necessary to wait until 1978. In fact, the church came very close to ending the practice in the 60s. That would have been far preferable in my view.

Mormonism is both a culture and a religion. Some changes are slow in coming because of cultrual factors more than theological ones. I again recommend the essay the church published. It really is excellent. All the best.