One Response to “Do latter day saints officially not. Believe. That Jesus…” 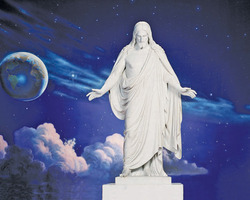 The North Visitors’ Center on Temple Square has an 11-foot replica of Thorvaldsen’s Christus on display.
Hi John. Thanks for your question. There's a certain amount of semantics involved in this question. We have to be careful, because we might end up using the same words to mean different things. Here are my answers to your questions based on what I understand of them:

1) We believe Jesus Christ is God the Son. We believe He is fully God. We believe He came to earth as a mortal man (in the flesh), as described in the New Testament. He was fully man during that time as well.

2) We believe that God the Father, God the Son, and the Holy Ghost together make up the Godhead (similar, but not identical to, the concept of Trinity in most other churches). The Father, Son, and Holy Ghost are one in purpose. They have the same, unified will.

3) We reject some of the teachings described the Nicene Creed (as well as other creeds) that are not Biblical. But we accept the teachings of those Creeds that are Biblical.