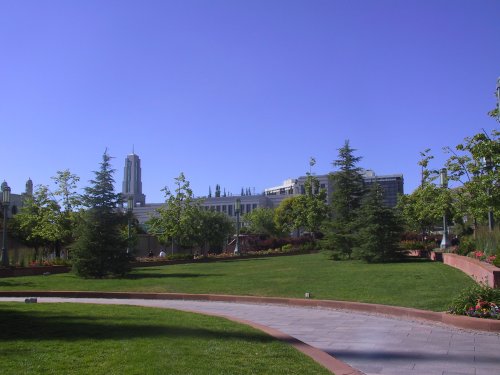 Turn right    Turn left    To corner
On April 6, 1996, the Church announced plans to construct, "another dedicated house of worship on a much larger scale that would accommodate three or four times the number who can be seated in the Tabernacle" (Gordon B. Hinckley, This Glorious Easter Morn, Ensign, May 1996, 65). This building (seen in the distance) would replace the old Tabernacle on Temple Square and would come to be known as the Conference Center.

The Conference Center has 1.4 million square feet of floor space and covers 10 acres, or an entire city block. The Center can seat 21,000 people, more than any other religious auditorium in the world. It also houses an 850 seat theatre.The Main Street Plaza, once part of Main Street in Salt Lake City, was bought by the Church to make a pedestrian thoroughfare and to connect two major sections of temple square. (Ref)